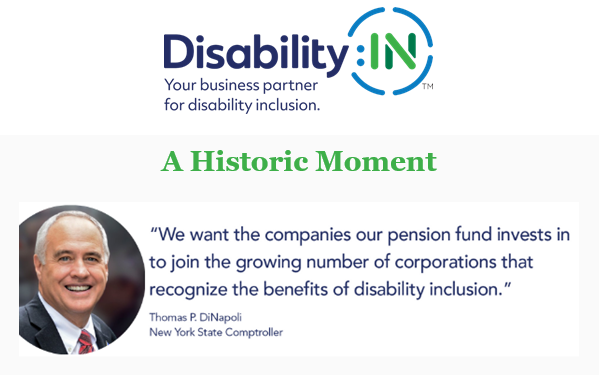 Great news from across the pond.

New York state comptroller, Thomas P. DiNapoli announces the request that 49 of the largest U.S. companies report on their inclusion of people with disabilities.

Announced today New York State Comptroller Thomas P. DiNapoli has called on 49 of the largest U.S. companies to report on their inclusion of people with disabilities across the enterprise.

As Comptroller for the State of New York, DiNapoli manages the third largest public pension fund in the United States, with an estimated $207.4 billion in assets.

This announcement comes less than a week before leaders all over the world gather in Davos to define priorities and discuss agendas, including disability inclusion.

What companies can participate in the DEI (Disability Equality Index)?

– Private-sector (non-government) employers that are not owned by a larger U.S. incorporated entity

– Businesses owned by a larger U.S.-incorporated entity must be rated and represented on the DEI and its related publications as part of the larger entity. Exceptions to this policy are made on a case-by-case basis at the discretion of AAPD and Disability:IN, typically only for those businesses in a temporary restructuring process (e.g., temporarily owned or taken private by a private equity firm before being spun off as an independent entity or sold), or for situations where a subsidiary entity wishes to participate under the condition that the larger entity will participate in a subsequent year.